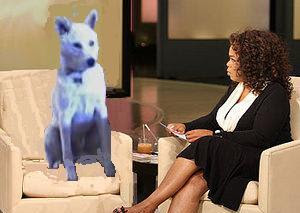 In a rare appearance last week—live from Chicago—legendary talk-show host, Oprah Winfrey, welcomed Professor Chuck E. Boobenstein as a guest on her show (see photo).
Chuck, who lives in an area of Washington DC's Capitol Hill commonly referred to as Ward 6, believed strongly that by getting his story out in this forum, he would appeal to savvy daytime viewers who typically need these pockets of information to navigate through tough times. Where else but on Oprah could he score such a direct hit?

The Harpo production staff hoped that after Oprah announced the end of the show in the same week, guests like Chuck would revitalize her final years with better examples of what Oprah has been calling blessings. One year she gave out 1099's directly from the IRS that went along with her gifts [to help with their taxes]—a blessing indeed for anyone receiving a jumpstart from Oprah.

Chuck, quite frankly, has been on top of his blessings by "going rogue" after unfair media coverage, dubious dogiticians, and armchair quarterbacking. At numerous times during the interview, he clearly could not admit to ever having said anything that would have flawed his character. What others are saying by proxy to protect themselves from being the same kind of victim at the wrong place, the wrong time, and the wrong choice is this—"It just ain't right"—"You cannot take an Alaskan Husky mix like Professor Chuck E Boobenstein from day-to-day duties and then expect to disguise him easily with the lipstick, the rifle, and the Married-with-Children attitude."

What Chuck wants everyone to understand now is that by going rogue he stays committed to his core values and truly "blesses" all with his grass-roots agenda—wherever he pleases, in whatever capacity that offers the most dignity—often kicking up his heels with pride. Oprah, who was clearly riveted by the interview, says, "My message has always been to live your best life*...[pause with tears welling up]...I just love lifting up my guests or having them jump on my furniture when it makes them feel good!"


Best Foot First's Blog Dog is for entertainment purposes only. In fact, that any meeting has ever taken place between the two parties cannot be confirmed by—and would likely be denied by—Oprah and her staff. *live your best life is a registered trademark on oprah.com.
Posted by Professor Chuck E Boobenstein at 4:26 PM No comments: