The Professor Barks Back at Elizabeth Lauten


In an area of Capitol Hill referred to as Ward 6, Professor Chuck E Boobenstein comes to the rescue for the Annual White House Turkey Pardon (see photo). 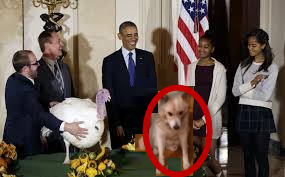 Two turkeys, Mac and Cheese were pardoned last week by executive order. As Obama smiled and joked, Malia and Sasha acted like teenagers. Meanwhile, one of our GOP Communications Directors got on Faceback and did one of those, "could have been drinkin'" status updates that provided a tongue lashing to the Obama sisters and chides to the President. Holy smokin' turkeys!

Well, here's the evidence that was deleted from her profile and her profile went private. 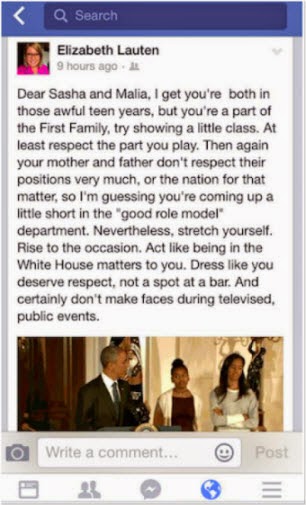 She works for U.S. Representative Stephen Fincher from Tennessee. What was she thinking? As if the GOP needs to smear the Obama's for anything else. Their list is pretty long—now the girls.

Chuck, The Professor, who normally doesn't suggest anything controversial has implied in subtle but poignant ways that she should take her diploma from East Carolina and do a good old-fashioned "repurposing." Lots of us have heard the expression, "The dog ate my homework." The Professor's idea is a bit stronger and more vivid. Use your imagination.

Communications Director, humph! What do you think Stephen Fincher will do come Monday?

One of the things that the Professor likes to do is confirm facts with real data. You know, like if you smell cheese in the air, there might be a sandwich somewhere to bite into or if someone knocks on the door, there might be a delivery of Chinese food to scarf on later.


Same thing here, let's check on some facts with evidence leading up to the Facebook rant and possibly a regular routine for Elizabeth. 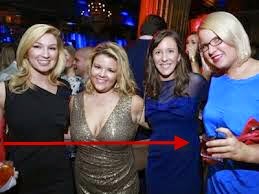 Now who cares if the photo we found was taken several years ago? What it does do is establish a pattern.

If these photos are public, we can just grab and post as she did, even if it might be out of context or serves to prove a point, right? We have no idea where that habit comes from. Oh, hint, from the GOP possibly. "If you like your hairdo, you can keep your hairdo."

Back to the evidence. She's pictured  here with a clear "look at me, look at you syndrome" and a drink (see photo with arrow above). And not at all in her favor. Carefully look at this photo and then the ones of the Obama girls. Talk about classy!

Ok, you be the judge but who the heck picked out the outfits for the ladies? Those lovely sweaters that the Obama sisters were wearing don't look anything like the bar outfits we see here. To be fair, these ladies and Elizabeth were at a bar—one would assume—or working. Who knows?

Has anyone thought of, "pick on someone your own size (or age)"—and not the President's teenage daughters?

The Professor has been a thought leader for years on these kinds of public-facing issues and has been called in a number of times to help with some of the misgivings that we've faced over the years as constituents:

Posted by Professor Chuck E Boobenstein at 7:59 AM