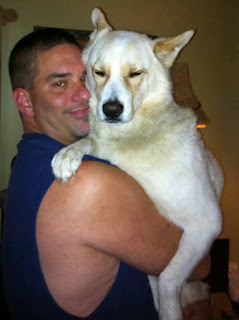 After several attempts at joining the mainstream Dogpublican and Democat parties without success, Professor Chuck E Boobenstein—in an area of Capitol Hill referred to as Ward 6—announced his new "Chance-It" party and obtained a very substantial endorsement (see photo). Who needs Oprah when you can have "all that" from Chuck's most adoring constituent?

Professor Chuck will most likely be running tight on the heels of Stephen Colbert - Herman Cain or vice versa and subject to the same thwarty scrutiny of their naysayers. Chuck in tandem with these GOP wannabe's challenges the fragile line between satire, chance, and what some "lefter besters" call the "new reality." Why not chance it?

The Occupy movement has nothing on this one. I mean really. What was left up to chance for them? In these encampments that were owned by someone else usually, a typical occupy constituent had no chance to gain anything—while tying up traffic, not working, and consuming public resources. Oops, please don't misconstrue this sentiment—hate the game not the play ah—these folks all have intentions worth validation but the game dude, not happenin'—bank, bet, yo, trippin, you ain't "beep." (Probably a little off topic as usual but took a chance at the proper fit here!)

Ok so what's the Professor's platform or agenda if you will; how does he define his base? You guessed it—leave it up for chance! Sort of like the "nine," "nine," "nine," "not" strategy but more improved based on chances and proven chance theory. One failed strategy typically increases the likelihood of a more favorable chance option to emerge with better results—sort of like what dogs do when their regular meals have a chance to be superceded by a tasty chicken wing or hunk of cheese.

Chuck has made plans to take no chances while chancing the Chance-It party—chance plans unfold with an enchancement that litterally fetches no chants . . . Sound familiar? . . . Of course it does—like the many "meat throwing" exercises made famous by both of the mainstream parties during their rallies. Chuck has been a fan of meat throwing and even more so with the bones of the matter attached. You know the kind of political rhetoric that you can chew on without disturbing others.

Anyway, needless to say, his long-awaited treatise on Barcheology—now even farther away from being finished—takes a side dip again. However, Chuck's lofty pursuit of our top-dog, Presidential beg—don't you mean bid—surely survives the neighborhood cocktail circuit over a postponed research paper. Cheers!
Posted by Professor Chuck E Boobenstein at 6:11 AM