VP Joe Biden Enamored by The Professor in an Intense Bromance

The Professor Chuck E Boobenstein—from an area of Capitol Hill referred to as Ward 6—has been officially bromancing, that is, "bro, romancing" Joe Biden. It's not a sexual thing but definitely intimate. You know, in a guy friends kind of way. Dr. Jill Biden encourages this softer side of her hubby and was pleased to know that Chuck is an Assistant Professor at The University instead of some beer-drinking, jockstrap-slinging, Camaro-driving white boy. 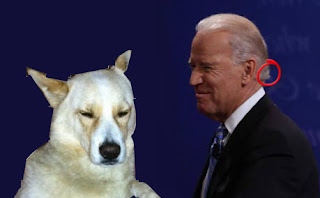 What sparks the mutual feelings of respect cannot be denied. It's the Biden Bravado. Some say it sounds very similar to Chuck's Pontifications when other dogs get out of line or when danger lurks—very I wish Cat oh lick.

Now for an example, when Joe, the VP-after-a-six-pack discussed gun control, he told folks to get a two-barrel shotgun, step out on the porch, and fire two rounds in the air when danger is eminent. Most people would have to build the porch first. The point, however, was no need for an assault rifle. Who knows what kind of beer he was drinking? The subtle message sometimes gets lost in the tone and timber-ish sound of Biden's voice. Or, what about that duck-tail hairdo (circled in photo)?

Anyway, The Professor does a similar kind of bravado when the UPS guy comes and tries to hide packages in the trash or recycling bin. Similar. Oh-yay-awe! Sometimes biting the heels of anyone in the way.

They've been secretly meeting behind the scenes. Although the Professor looks smitten (see photo), he's just doing that competitive mano a mano bored look at one of Biden's bragging moments. This might have been after the Democratic National Convention. It's not been confirmed but this sort of after-the-event-camaraderie happens regularly.

Biden has been to the Professor's events every now and then to share in the types of victories that he has as well, such as convincing his constituents to donate more—funding such projects like the ban on "no pooping" zones—something both Biden and the Professor definitely have in common. We all should feel comfortable and feel free to poop anywhere we want. Don't you think?

They do have the same types of gaffes on numerous occasions like falling asleep during the 2013 Inaugural Address and Chuck slipping off the couch while napping. It happens.

Cheers to Biden and Boobenstein!


Posted by Professor Chuck E Boobenstein at 4:26 AM