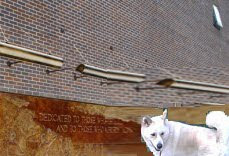 Professor Chuck E. Boobenstein, who has been curious, and embarrassed by what that might mean, goes to "Ground Zero" in Lower Manhattan. Not quite tenured as a full Professor from an area of Capitol Hill referred to as Ward 6, Chuck—even in his apparent awkward state—wanted to know more. Putting his pride aside, he just went with hope and unknowing.

The scene—suspected as a hot bed of stimulation for dogma-scanning abilities—indeed, seemed calmer than he would have ever imagined. In fact, his stock pile of "chew-ease" that would typically keep him from losing his voice from all the barking, fell to the wayside. Why would such a scene humble him? Normal, Urban, Thriving, Multi-Rodent, and Consumer-Driven.

The feeling, not right, just tied up a knot inside Chuck, as he looked around for some help (see photo). What happened here? Now what's happening here? He wanted to "go home" but decided to keep his internal instincts alive—unlike the way he typically loses a game of tug-o-war with housemates and some of his doggish rivals and left-right rope swingers, who always seem to get caught up in a meat-eating, oops, media-eating cluster-folly.

The look on his face still frozen, he decided that this place, the pavement, the memories, and the look on other faces must be honored. But how? Surely not the typical treatment with the kicking up and all, he pondered what this was doing to all those around him. Who's on what side? Should he beg from a stranger or just go back home?

There were a few master-wannabe's holding signs and chanting about some amendment rights, congregation stuff within blocks (big-city blocks, you know, the kind that jack up cab fares) of where he stood. Chuck E, as an astute Professor of Barcheology and devout Dogmustlick Deacon for his congregation, just might have the capability to understand the issues, or sort of—although not familiar with praying without a congregation, in private (does that matter?), or praying at all. Chuck finds no clear answer to this doglemma. Fa' Ma-ham-ed's sake, or jeez, who can Fa' guess whom or what—is anybody gonna get this block-headed, geo-ritzy show of "I've got more toys (or treats)!" figured out?

If the Professor chooses a side, then he shuts down the other. What if the other side has better treats?

Dang! Not so simple but surely an opportunity to claim a steak or prey on something.

Unfortunately the Professor's trip ended abruptly—he had forgotten to do some of his chores at home as well as submit his first manuscript for a treatise he had been working on—due the next day—and, critical for his future success as a full, tenuous Professor.

As "Chuck Eeeee" was being called back, in that high-pitch, sort of baby voice, he at least decided that he wasn't going to take sides. He just simply did not know enough—and, the day-to-day duties that he honored too, seemed to be just as important.
Posted by Professor Chuck E Boobenstein at 6:37 PM No comments: