When the Going Gets Rough, the Tough Go Golfing! 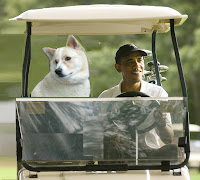 Boobenstein and Obama Hit the Greens

On a moments notice amidst crisis and turmoil, these two can always find their way to the golf course—that is—the POTUS and The Professor Chuck E Boobenstein. Look at those haughty smiles and ensuing chin wags for sure (see photo right). Biden, who's a typical partner of the President and a great friend of Chuck's, has decided to caddy this round and is not too far behind them—ready for and to say anything as usual. See Chuck's bromance with Biden here.

The Professor heard the President's speech on Saturday about Syria and knew he'd be getting a call on his special home phone promptly (see photo below).

Anyway, Chuck lives in an area referred to as Ward 6 and coincidently "on the way" to the golf course at Fort Belvoir.  Barack and Chuck both have been known to bat around small things in a very precise manner while keeping chatter to a minimum.

Speaking of chatter, seems like we're not short of that anywhere on the political front—in fact we're so chatty we can't get anything done. Does that mean we're going to chat the Syrian crisis into an impasse like everything else for the last few years? Now who's to blame here?

Maybe a good round of golf was the best thing for this situation. He sure got a bashing from the "opposition" - I mean - John McCain and Lindsey Graham. Republican pundits on CNN also thought a round of golf was kind of stupid. Why are we being partisan about this? Holy Slugs, Batman. Isn't Congress on vacation anyway? I wonder how many of them went golfing without notice. If any one of them are trying to unwind after another busy, do nothing session, then shame on them too.

The Professor and Obama did have a nice time even though under the veil of formidable challenge. All were relieved that Biden kinda stayed in the background digging out of sand traps here and there. Seems like the Professor could not swing very well that day. He wanted to be of complete support of his President but ended up being a bit nervous with this kind of "no-meat-on-the-bones" Congress.

In theory, it's a good idea to get the support of our democratic constituents. However, this might just be situational. They're on holiday so to speak. Probably time for the 19th hole.

Posted by Professor Chuck E Boobenstein at 6:18 AM