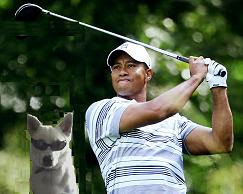 Professor Chuck E. Boobenstein, a well-known fan of Tiger Woods from an area of Capitol Hill referred to as Ward 6 (see photo), has discerned that a perfect swing often comes laden with "complications."

Tiger, a.k.a. Eldrick Tont Woods (whom the Professor has been affectionately calling
"Chippy") has gotten tangled up in a swingin' frenzy that has cost him more than just a sand-trap dig in the normal business of the day. Chuck, on the other hand, sees the sand trap as an opportunity to just dig up with pride the comings and dumpings of the day.

The problem with Tiger's swing was not "what it was" but more of a
"swingin'-SHA-WOOSH" against endorsements from Nike and others, such as Accenture, who now claim that a swing like Tiger's could be worse than selling recycled software to the government. Who's to blame here, really?

Apparently the Dalai Lama had trouble sorting out whether a man named "Tiger," who was going to swing (or "not swing"), might be worthy of an apology. As Chuck claims, "When you swing, swing proudly until you can't swing any more." In fact, several times, on what is the equivalent of a pristine golf course, the Professor has been known to swing so much that some of the divots actually replace themselves! The apologies never come gushing out in controlled settings but rather prideful sighs that the tufts have kept coming.

The Professor has had very little patience for the complications involved with a perfect swing but can only sympathize with Tiger. How can one's perfect swing end up causing such a frenzy?

Best Foot First's Blog Dog is for entertainment purposes only. In fact, that any meeting has ever taken place between the two parties cannot be confirmed by—and would likely be denied by—Tiger and his staff. Mention of Nike and Accenture have been included for humor only , and in no way intend to offend or in any way diminish the legitimate efforts of these two entities.

Posted by Professor Chuck E Boobenstein at 6:48 PM No comments: