Donald Trump Gets Dogged by The Professor

Scuse Me! Boobenstein Unleashes the Truth 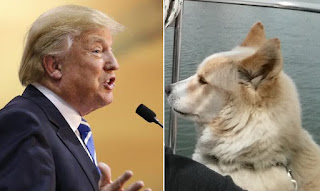 Look at that face—and we don't mean The Professor's—do we really want that sour puss face in the Oval Office? I'm mean, I'm sure he's probably a nice guy. Lots of people love him. But look at his face. He's ugly. Right. He's ugly [said with a Brooklyn accent].

Talk about oval and bad hair coming out of somewhere, what about those oval peanuts below his belt that keep getting him in "Trumple?" He's been quite hair-ed-ly ballsy with just about everyone who crosses his path.

Has anyone else been reminded of when Al Bundy used to stick his hand down his pants and then sniff it? Neither have we but thought it might be relevant somehow.

To be more fair, The Professor is pleasantly surprised that our Trumpster "negotiated" with the RNC to keep the next debates to two hours so that Carson and Jeb don't fall asleep. Less is more in this case. A longer night time walk or chew of a pigs ear over the GOP implosion will serve us all well. Thank you Donald! Banana fo fama fee fi fo Fiorina oh no Obama . . .

Come on folks, this "lightweight" robot can't stop repeating himself. "I LOVE mexicans, I LOVE woman, I LOVE chinese, I LOVE guns, I LOVE pro live, I LOVE evangelicals. I LOVE "traditional" marriage. I LOVE immigrants!" Oops. I mean I married a couple of Slavic, non-Mexican, immigrants and then deported them out of my life. Easy come, easy go!

Here's a Quick Survey that The Professor architected for this effort:

Now, what about his favorite books? Holy 1989, his "Art of the Deal" book and the Bible. Really? Are you serious, toenail fungus? I mean, "chi'le please." There's a whole bunch more on anyone's reading list that is not so pre-dot-com, pre-9-11, pre-millenial. and pre-gmail and far more compelling. Maybe he's not aware of the works of Elon Musk, Malcolm Gladwell, or J. K. Rowling? Google it.

The Professor easily concludes that the GOP seems to have a "donkey" in the room—a jackass peeing on everything that our beloved conservative elephants want. Even S.E. Cupp and Ana Navarro , the most prominent Republican pundits on CNN, are struggling with this.

The very things that the GOP has believed in are being hijacked by this xenophobic misogynist who has embraced them only "to win" for the sake of wining when in fact he had dissimilar beliefs in the past. It's almost satire that his megalomania favors conservationism.

Why doesn't he deny same sex couples admission to any of his money-making establishments for the sake of religious liberty?

Did the Professor actually think that out loud? Probably not.

The Professor Lends Dog House to Speaker of the House, John Boehner

Boobenstein Provides Much Needed Dog House to Worthy Cause


In an area of Capitol Hill referred to as Ward 6, Professor Chuck E Boobenstein announced today that he's lending his dog house to our current Speaker of  the House (see photo).

Chuck's albeit rarely used part-time residence will serve as John Boehner's "time out" location for his recent antics on the House floor—trying to upstage the President with foreign policy—holy bad dog treats, what was he thinking?  I mean, talk about a leg up in all the wrong places! 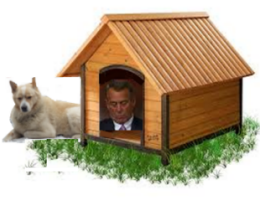 The signature pouting and mysterious tan that this representative from Ohio has will hopefully subside to normal levels after a period of time in the box, so to speak. I mean, who hasn't questioned either of these things about The Speaker?

It just doesn't add up. Everyone has foibles. I mean The Professor chews on his paw incessantly when he's bored but he doesn't lack integrity. In other words, we can excuse the tan, the pouting, and the bravado at times on the house floor about how much our President has "lied" to the American people—as Boehner puts it—but we don't excuse a sheer lack of decency when it comes to The United States of America. We've fought our own civil war to become who we are now—the strongest nation in the world. So why undermine it, Mr. Speaker?

John Boehner's inviting one of our strongest allies' Prime Minister, Benjamin Netanyahu, without consulting the White House, was a big mistake.

By the way—not sure who calculates these statistics—Barack Obama has probably been one of the most honest Presidents we've ever had. He was not lying when he said, "If you like your insurance, you can keep your insurance." That was what was considered a fact at that time he said it and we did not know that the insurance industry would change their tune after he said that. Fact.

In spite of that, maybe the problem that Boehner faces is that so much of what our current President, Barack Obama has been doing on so many fronts has been working, including foreign policy. Trying to get a leg up like this, after trying to appeal Obamacare 100 and umpteen times, or proposing legislation that will be vetoed, is just utterly insane.

There's a lot that's just plain messy right now in Congress. We're all hoping a little duty time in Chuck's place for The Speaker will give us all respite. Thanks Chuck!
Posted by Professor Chuck E Boobenstein at 3:36 PM