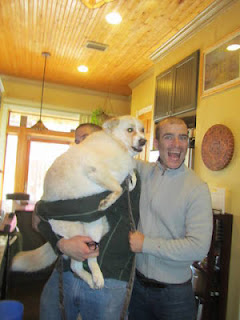 Yesterday, in a area of Capitol Hill referred to as Ward 6, the Professor Boobenstein bow-wowed out of his "Chance-It" Party race that he announced a few months ago. He hopes to set an example somehow for all the greedy constituents and never-do-wells who want to drain the media with countless hours of unnecessary barkitudes.

His first challenge was his Chair, "Max the Man", who had perfect motives at first but then quickly got caught up in the mix, so to speak. Max, "What were you thinking?" What a mish mash mix up for media to mangle?!?!?! He's no Campaign Chair, but at least he knows how to smile like the Professor for the media as necessary (see photo).

Chuck is delighted to get back to his Treatise on Barchaeology and finally has better research to support his tenure at University (British translation). He surely will not get anywhere near the barks associated with Breitbart's new challenges against his dear friend - Oh Bam Ah. Fortunately, those who have vetted Chuck will never acuse him of being a white dog in black boots.

The President and Chuck plan to resume regular chin wags once the dang Repubs get someone in there. Speaking of hair, why is it that wannabe first ladies from the right tend to have nondescript shades of blond hair? Cindy Micky Cain appeared on Piers with something on her head that looked a little—shall we say—"clean-moppish" Jus sayin' 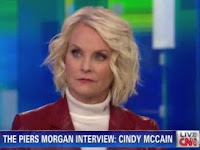 Very impressed with her stance on several issues, though, go Cindy (left-pictured here). Ok, enough for now. No wait, Chuck was going to ask Cindy where she got the Siberian eye balls but did not have the chance and looks like she's shed them for the mop. Anyway, The Professor Chuck is quite content now with his natural Alaskan eyes and will wait to see if Obama picks him for a VP Spot or Cabinet Position (preferably close to a window).
Posted by Professor Chuck E Boobenstein at 5:55 AM