The Professor to Officiate Drinking Games for State of the Union 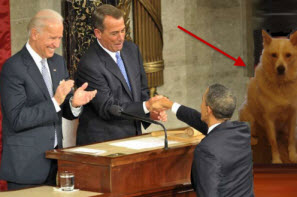 The Professor Chuck E Boobenstein—from an area of Capitol Hill referred to as Ward 6—has been doing a lil' research for a suitable drinking game for the State of the Union address by President Barack Obama this evening.

In true social media fashion—Linkedin, Hookedin, HoodWigged, Facebook, Twitter, YouTube, Instagram, CrabFeet, and GagSquirrels—Chuck plans to be live on the Hill (see photo) with a web cam that can be streamed into any one's living room and be the "official" Officiator through whatever social media is your preferred "at-home" favorite. Don't mix this up with "work" social media.

Anyway, The Professor will be able to quickly quell any disputes about what happens according to the rules of the game. The seriousness of this role might be as debatable as everything else seems to be during this political season. We're realists, not bitter, and just a little hopeful.

Now to the game, Chuck has chosen the following set of rules from his dear friend Will Durst at the Huff Post. You won't be disappointed.

WHAT YOU NEED TO PLAY:
Four taxpayers of any sex: one rich white banker-type wearing a suit. Cuff links would be nice. One person in a blue work shirt, another in a white shirt and one wearing rags that in a former life might have been an integral part of a frantic escape through the sewers of Paris. At high tide. The four group around a coffee table directly in front of a television with newspapers laid on table and floor.
One shot glass per person. Everybody brings own and places on table. Suit gets first pick for use during game. White Shirt picks next, then Blue Shirt. Suit pockets last glass as well, and Rags either rents it, borrows a replacement from kitchen or drinks out of own cupped hands.
20 buck ante for White & Blue Shirt. Suit throws in a quarter while Rags can write an IOU.
Fondue pot on table with two packages of Li'l Smokies stewing in Hawaiian barbecue sauce, surrounded by 100 cocktail toothpicks. The kind with the little American flags wrapped around the top.
A large stash of canned beer. Rags gets the cheapest stuff that can be found, like Old Milwaukee Ice Dry Light; Suit gets to drink whatever import he requests; Shirts get to pick favorite domestic, but are required to pay for beer, Li'l Smokies and accouterments.
RULES OF THE GAME
EXTRAS
Anybody who can identify person giving Republican response doesn't have to watch it. Suit takes home cash discarding the IOU.
Whoever comes closest to guessing number of standing Os takes home leftover beer after Rags finishes cleaning up.