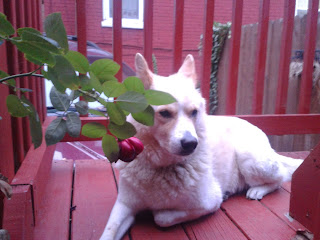 Professor Chuck E Boobenstein has apparently unleashed a keen sense of optimism—trumping the status quo with a view of the world from rose-tampered fences in an area of Capitol Hill referred to as Ward 6 (see photo).

After being canned by CNN in favor of Candy Crowly to moderate the Presidential beg—I mean bid—for the White House, Chuck although mildy embarrassed and defeated, has decided to get over himself and view the world differently.

Quite frankly, the status quo coping strategies from Chuck's past now seem unnecessarily biting or bellacose—even against conservative snarky barkers and liberal swaggers who know how to kick up dust. Championing a good flip flop in your favor or suggesting that failed policies contribute to greed or vice versa as a worthy platform really has no place in the Professor's new vision. Don't worry, that's not intended to make sense.

Ok let's get to the basics. After a nasty supra storm, that dang rose positioned itself right through the very fence borders that used to protect what Chuck proselytized in the past—like a New Jersey Govnah suddenly embracing what appears to be hope. No need to bash, minimize, throw meat with or without bones to his constituency. Look, Listen, and Love. Even that fence has the color of a throbbing heart.

Chuck could be onto something here, and will continue to focus on the hopeful, the resilent—and eventually get on to that long-awaited Treatise on Barcheology by the tail end of one of these years.
Posted by Professor Chuck E Boobenstein at 9:52 AM