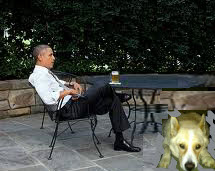 Professor Chuck E Boobenstein, from an area of Capitol Hill referred to as Ward 6, considers Presidential straw votes with double paws down in Obama's beer garden. They needed to catch up since their last Chin Wag at Chuck E's place a few days before the Inauguration. The rants, ravings, and evangelical indigestion coming from those in the race against Chuck's dear friend Obama, have no substantial platform other than blame and fear.

In fact, holding up a thin piece of hay and watching the wind blow between these new candidates in some kind of straw vote has caused nothing but angst for the Professor.

Chuck has both paws down with Obama to symbolize how common sense should prevail. He does not plan on being tail-wagged by the ridiculous media hype and ad campaigns that suck the intelligence out of educated folks with subtle, highly-crafted messaging.

All leg lifting aside, Chuck hopes to witness a civil upcoming Presidential election where real data and inspiration prevails, like when a constituent tosses a rawhide towards him as a reward for doing a good job. He would rather not have to endure what seems like mean-spirited, heart-stabbing strategies from some of the current Dogpublican candidates who spin the complex role of our government—yes we the people—into a cast of unwanted villains who steal, squander, and disregard the freedom and rights of others as over-indulgent, reckless scoundrels. Come on now. Does this kind of stupid logic work?

Are we too busy to study the facts about the economy, how taxation works, the difference between government spending and consumer spending, increasing the production of innovative goods and services versus increasing the demand for existing goods and services, which are sometimes produced more in other countries than our own? Are these ideas too difficult to consider or should we press the snooze button one more time? We need to delve into the cause and effect of what's really happening and why. The Professor—as a habit—always studies or sniffs out where, when, and why he's leaving his mark anywhere. When it's good there's nothing wrong with kicking up some dust or divots as warranted.

Let's not make it easier to associate our hard-working, earnest—for the most part—public servants with derelicts up the street who can't manage money or don't know what's best for Aunt Nellie Mae or Veteran Bob and paying attention to sloppy rhetoric. Take the time to find out what's really going on in the government and how a process has come to be. People in government cannot be compared to neighborhood thugs, do gooders, or even softball teams. There's too many interdependent actions at play. Minimizing our President's service by using language like "Stealing" or "Ruining" or by personifying initiatives like "Obamacare" feeds into deceptive understandings.

Professor Chuck will continue his vigilance during this election season with both paws down as he finds more answers to showcase in his upcoming Treatise on Barcheology.
Posted by Professor Chuck E Boobenstein at 9:00 AM